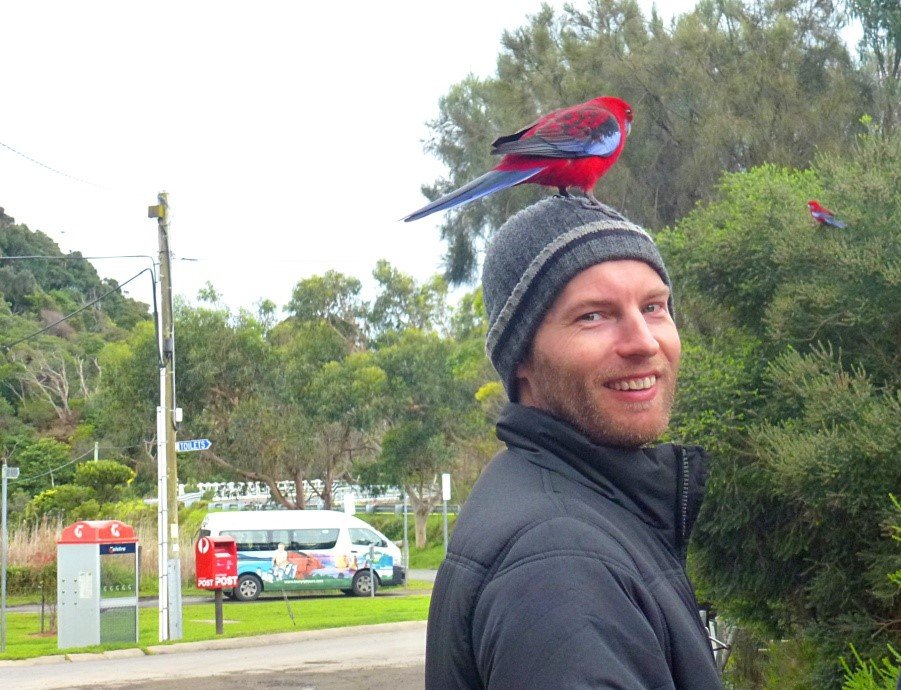 We’re driving out over the Westgate Bridge at 8am on a chilly July morning. I’m enjoying the views and feeling grateful not to be on my way into the City of Melbourne. The cars on the other side of the road are queuing up, as opposed to our side, which is running smoothly out of the city.

I’m sitting in the passenger’s seat next to our guide John, a very down to earth Aussie fellow who’s got a brilliant knowledge about all things Australian.

Our first stop on the tour was not on the itinerary. Tour guides always have an amazing ability to see things that your eyes would never catch, and John is no exception. In the middle of nowhere in a field full of sheep, he spots a mob of kangaroos, who were enjoying their breakfast in a spot of morning sun. I bet you, that no matter how much you strain your eyes, you will not be able to spot a roo before John does.

Now, as every other Aussie tour guides I’ve had, John seems to assume that we foreigners get their native lingo. I consider myself as being rather good at understanding different dialects of English, but Australian slang takes the cake. So you might want to prepare for not understanding a word of what anyone says.

Every year 1.7 million people visit the Apostles. That makes an average of 4.658 people per day. So you can imagine it could get a bit crowded. Now, the upside to this tour is that you do it backwards than what people normally do, which means that the first stop on our itinerary is the amazing 12 Apostles. And because the Apostles is our first stop in the morning, we pretty much had it to ourselves. (No, I’m not kidding.)

I have in the past had the fortune of visiting The 12 Apostles, and it is always absolutely crawling with people. As a tourist, you expect this from such an iconic Australian landmark. – But having said that, there is something absolutely magical about being there in the morning almost on your own, no noise, no crowds just you and a handful of people. The view of the 12 Apostles is simply breathtaking and no matter how many times I come here it will never cease to amaze me.

At The 12 Apostles you have the option to take a helicopter ride where you fly out along the coastline and over the Southern Ocean. (Oh my god, please do so) From up there you can truly see the beauty of the rough Australian nature, with its vast distances, flat plains, mountains, forests and the light blue see. I have done this helicopter tour twice. It is worth every cent, and I would definitely do it again. Up there you get a completely different angle of the iconic Great Ocean Road and the Australian coastline when you are looking out over it from a distance.

Our next stop is Otway rainforest. As we take a walk under the gully ferns and ancient trees you truly feel small walking through this ancient rainforest. Some of the plants here have existed since the time of the dinosaurs. It’s pretty amazing. There are trees here so big you can live in them and some of them are over 300 years old.

After that we make a short stop at Kennett River. At the first glance it doesn’t look like anything very exiting happens here, until John puts his hands in the air, and within a couple of seconds he has a bird in each hand, and one on his head.

Then we walk further in under the trees, and when you first learn how to spot them you see koalas everywhere, sleeping in the eucalyptus trees.

When you come from as small a country as Denmark, where pretty much all you have is cats and dogs, seeing animals in the wild will always be something truly extraordinary.

After Kennett River we make a small stop at Aireys Inlet to see Split Point lighthouse and take a little walk. I have always loved lighthouses, they make you think of simpler times.

John is also quite the storyteller. One of the more amusing stories he told us, was about one of the lighthouse keepers, a Mr. Richard Baker. Mr. Baker worked at the lighthouse from 1915-1919. Now, Baker lived quite the active social life and rather liked his drinks. He is said to have scratched a hole in the black paint on the back of the lantern, so when he was at the local pub, every time the lens flashed, the light winked through the hole, assuring Baker that everything was well in the lighthouse and he could keep drinking. Sounds like a smart man to me.

At about 6.30pm we arrive at our accommodation for the night, the Big4 Beacon in Queenscliff. John shows us to our rooms and then brings us our dinner (luxury# 1) and then we have the night to ourselves. The rooms have TV´s. (luxury #2).When you are travelling you rarely watch TV, and something as simple as an episode of FRIENDS can make you feel at home wherever you are in the world.

The next morning we meet for breakfast in the bungalow. John puts out an extraordinary buffet of breakfast treats, including of course: Vegemite. For some reason Australians believe that cooked-down axle grease makes a good breakfast spread. Vegemite is made from yeast extract and is very common and loved around Australia. It is in fact also one of the grossest things I´ve ever eaten in my entire life. I’ll stick to my Nutella.

Our first thing for the day is our Ferry ride from Queenscliff to Sorrento on the Mornington Peninsula.  Nothing quite brightens up your morning like seeing two dolphins swimming alongside the ferry.

We arrive at Moonlit Sanctuary and meet our guide for the rest of the trip, and say goodbye to John. The new guides name, Rael, is pretty much as Australian as you can get. Long hair, plays the didgeridoo, has the thickest Australian accent I have ever heard in a person under the age of 50 and he is absolutely crazy about his country.

At the sanctuary they have all kinds of different native Australian animals. Dingoes, wombats, koalas, emus and of course kangaroos. Now, I wouldn’t say that I was scared of kangaroos before, let´s just say I had a healthy respect for them.

But the roos here are something different. Even at other sanctuaries, I have never seen them so calm before, they always seem to be a bit skittish. But here, they slowly jump up next to you, sticks their noses in your hand to see if you have food for them. At the shop you can buy food for the roos for $2. It´s all worth it. Now I´m a fan!

Fun Fact#2: Emus and kangaroos are believed to be unable to walk backwards, and that is also why they are on the official seal of Australia, symbolizing forward progression.

Meet Panny, originally a mechanical engineer with a passion for chocolate. Panny started making chocolate statues and replicas of famous buildings in his house as a hobby, but it escalated pretty quickly after people saw what he could do with ordinary chocolate. And now there´s a whole museum filled with his chocolate creations. How he does it I have absolutely no idea, but let me tell you what I saw: A 12.000 piece chocolate mosaic of Dame Edna, Michelangelo’s statue of David, (in full size of course) chocolate penguins, a chocolate waterfall and last but not least a solid block of 1 ton chocolate.

Last stop before the penguins is the Seal Rocks and The Nobbiescentre, a cold pleasure but a pleasure none the less. Rael broke out his didgeridoo and gave us a taste of his talents. Can it get any more Australian?

Can I take one home please? They estimate that about 32.000 little penguins calls Phillip Island their home, and they are just about one of the cutest things I’ve ever seen in my life. I was really trying my best to not be annoying to the other people at The Penguin Parade, but it is just so darn hard when you want to see as many of those little buggers as possible. First you wait, and you don´t see a bloody thing, until all of a sudden the whole beach is full of them.

I went on this tour in July of all times. You might think; Argh, Australia doesn’t get cold, they don’t really have winter down there. Think again my friends, in July it can get down around 0 degrees on the South Coast, and it was bloody cold, but it was still all worth it. If you are so lucky to meet some cool people and have as awesome guides as I had, putting on an extra sweater means nothing when you think about the memories you are going to get from this tour.(And luckily it´s only chilly down here for about 4 months a year) – So get going!! J

Let´s end on a good note with a Danish quote. (That wasn’t meant to rhyme)

“To move, to breathe, to fly, to float.To gain all while you give.To roam the roads of land remote. To travel is to live” – Hans Christian Andersen

Say Goobye to One of Our Favourite Interns: Tomoaki Aono

Hi, My name is Tomo,  I’m an international student studying Travel and Tourism at William Angliss, and I’m from Japan. I did an internship for the marketing team of Bunyip Tours as a part of my curriculum....
Read More

The last three days were a-ma-zing! I went on a three days/two nights Great Ocean Road & Grampians (a national park)tour with Bunyip.It all started on an ...
Read More
OUR TOURS HAVE BEEN SUSPENDED - FOR NOW Get in touch via email to get notified as soon as we are back on the road! Contact Us