One of the world’s most scenic drives is located just a few hours from Melbourne. The Great Ocean Road stretches for 243 km along the south-eastern coast of Australia and is one of Australia’s most famous road-touring routes. A mix of stunning coastline, rainforest, seaside towns and classic Australian wildlife makes for a great couple of days exploring! 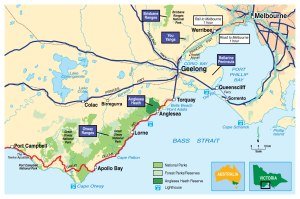 The first landmark on the list was The Twelve Apostles. The iconic limestone stack formations off the coast of Port Campbell National Park were formed by erosion of the sandstone cliffs and rise up to 150 ft. The stacks are temporary remnants of a retreating limestone coastline, formed from a mixture of sand and sea-shells deposited in an ancient seabed, and later compressed, millions of years ago.

There have never actually been 12 stacks; originally there were 10, but 3 fell meaning only 7 remain today. However, along the coast there are around 25 and 5 new apostles have recently been discovered underwater. So why the limestone stacks became known as the Twelve Apostles is all a bit of a mystery. Local folklore suggests it was because visitors can only stand in awe of nature and its creation, and hence the name’s biblical origins. 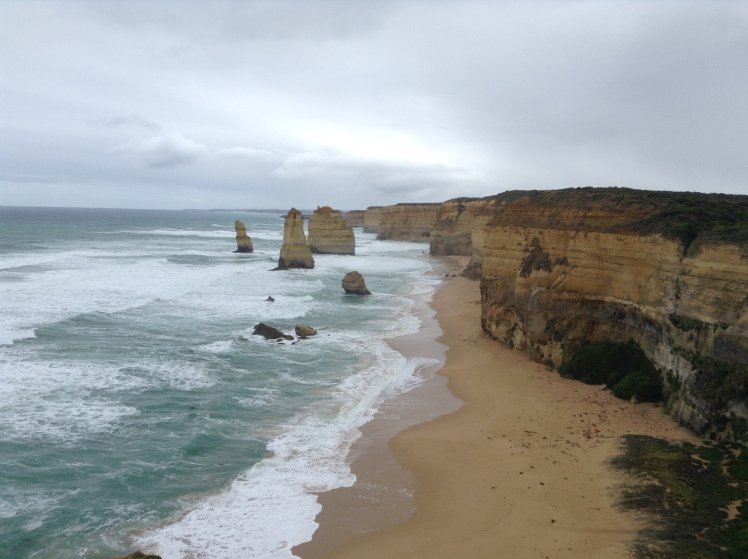 The Twelve Apostles
The impressive limestone formations continue all along the coast. Loch Ard Gorge is named after the ship Loch Ard, which ran aground when travelling from England to Melbourne, leaving just two survivors: 18 year old Eva Carmicheal, one of a family of 8 Irish immigrants, and Tom Pearce, the ship’s apprentice. After the ship went down Tom drifted for hours under an upturned lifeboat and was swept into the gorge where he heard Eva crying out from the water and rescued her.

Loch Ard Gorge
From the coastline to the rainforest, next up was a walk through Melba Gully in the Great Otway National Park. This is supposedly one of the wettest places in the state hence the prolific plant growth and the biggest ferns I’ve ever seen.  I love the “take only photos, leave only footprints” national park motto.

As the Great Ocean Road follows the contours of the coastline, the views are absolutely stunning. The road was built between 1919 and 1932 by 3000 Australian returned soldiers and sailors. Finding employment for the returned servicemen was a crucial factor in their rehabilitation to civilian life and offered them a chance to work again in the open, share companionship and contribute to a vigorous, young Australia (then only 20 years old!). The road is dedicated to the soldiers killed during WW1 and is the world’s largest war memorial.

Memorial Arch
A drive with a view
In 1924 an old steamer became stranded along the coastline. In order to float free it had to jettison its cargo, which included 500 barrels of beer and 120 cases of spirits. Naturally, the men building the road helped themselves to the abandoned alcohol, which resulted in an unscheduled drinks break lasting two weeks.

The Great Ocean Road winds along this scenic coastline
Today, around 7 million people a year visit the Great Ocean Road region, making it one of Australia’s most popular destinations. Sadly bushfires swept through the area last year destroying many homes and the damage to the land is still palpable, although many of the trees have started to show epicormic growth. The constant fire risk is highlighted by the fact that the fire danger rating road signs start at moderate and go to “code red,” which reflects the worst conditions for a bush or grass fire that homes cannot withstand.

… as well as wild parrots (Crimson rosellas) and Kookaburras sitting in their old gum trees!

The next morning started with a ferry ride from picturesque Queenscliff to Sorrento on the Mornington Peninsula. Interestingly, of the names of the 543 suburbs, neighbourhoods and municipalities in metropolitan Melbourne, 138 (~25%) can be found in Scotland, or are based on Scottish family names, Scottish titles or Scottish words. These include Aberfeldie, Blairgowrie, Craigieburn, Kerrimuir, Montrose, Skye, St Andrews and St Kilda.

Good morning from Queenscliff
Murray’s Lookout on Arthur’s Seat (definitely less windy and cold than Edinburgh)
Believe it or not, the rumours are true, Australia really did lose a Prime Minister near here! Harold Holt was the 17th Prime Minister of Australia and in power for 22 months before he went for a swim at Cheviot Beach and, well, was never seen again. It is still not known what happened on that fateful day.

Then began the afternoon of the cute animals (and the goose, but it’s pretty stunning right?).

The trip ended with a visit to Phillip Island to see the famous penguin parade. At 33 cm in height, the cute Little Penguins are the smallest of all 18 penguin species and unique in that they wait until sunset before coming ashore to avoid avian predators. The penguins are only found in southern Australian waters, with the largest colony inhabiting Phillip Island. Nothing warms the cockles of your heart quite like the sight of dozens of penguins suddenly emerging from the water and waddling up the beach.

Image Courtesyhttp://www.microflite.com.au/tours/phillip-island-penguin-tour/
Image courtesy ofhttp://www.nationalgeographic.com.au/animals/make-way-for-australias-penguin-parade.aspx
All in all a very enjoyable couple of days!

What to do at the Queen Victoria Summer Night Market

Victor from the Queen Victoria Night Markets Bunyip Tours decided to catch up with ...
Read More

The Great Ocean Road is an incredible scenic drive near Melbourne, with coastal views and incredible lookouts along the way.  Here's six top lookouts to stop in at on your journey. Urguhart’s Bluff (...
Read More