The last three days were a-ma-zing! I went on a three days/two nights Great Ocean Road & Grampians (a national park)tour with Bunyip.It all started on an early Friday morning…

Around 07:30 we left mesmerizing Melbourne to start our journey towards the Great Ocean Road. Our group was quite big, with 24 people from 11 different countries you could be sure there would never be a dull moment for the next three days. Our tour guide, Simon, was an awesome guy who seems to know everything about anything. While we were on the road he shared some stories about the GOR and how it was all created. Simon then took us to our first stop, Torquay, the town where all the big surf brands such as Ripcurl and Quiksilver were established. After Torquay we visited Lorne, where my fellow travellers enjoyed some super fresh prawns and oysters, and we all gazed at the beach where some surfers tried to become masters of the waves.

Animals in Aussie are Awesome

We then continued our way to the GOR where we drove past some stunning, remote beaches. Simon took us to a place where we could spot some koalas, and feed some beautiful birds. Right after we started walking we spotted the first koala, yay! Did you know koalas sleep most of the time, up to 18-22 hours a day? They eat eucalyptus, which takes a lot of energy to digest. Also, about 70 percent of all koalas are infected with Chlamydia… Might wanna think twice before cuddling them

At first it seemed as if the birds had their bellies full with all the seeds the tourists feed them, but eventually they showed up, landed on our arms and heads and dug in. They were not shy at all, giving us plenty of time to take pictures and bird-selfies.

Our lunch break was at the Cape Otway Lighthouse, Australia’s oldest working lighthouse. We ate our lunch while admiring this beautiful white lighthouse, and after lunch we took some time to climb up and enjoy the (windy) views. After the lighthouse we drove off to a rainforest where we hiked trough the green scenery enjoying every step we took.

Simon asked us if it was okay if we visited the 12 Apostles the next day instead of the end of the day. At a normal day the place would be packed around this time, so instead he took us to Bakers Oven. We were practically the only ones there, and when we climbed out of the bus to shoot some photos the sun even came out. It was a perfect end to a perfect day.

Chef Simon at your service!

As if it was nothing, Simon cooked a mouthwatering meal for 24 people in the blink of an eye, and even made sure the veggies (like me) were also treated to some delicious food. After diner we played some games, drank some wine and shared some stories. Tired but completely satisfied we went to bed, excited for the day ahead of us.

Get ready for some postcard pictures!

The next day we rose early so we could beat the crowds and get the 12 Apostles (almost) to ourselves. Before we got to the Apostles, Simon took us to Loch Ard Gorge, another stunning beach with big rough cliffs where we only came across a handful of other tourists.

And then it was time for the moment we had all been waiting for: the 12 Apostles! And thanks to Simon we were so lucky, there was hardly anyone there! No fighting with Chinese tourists and their selfiesticks, but just enjoying the beautiful view of the 12 Apostles and the Sisters at the opposite side. Did you know that there never were 12 Apostles to begin with? There used to be 8 Apostles until one of them collapsed in 2010. Still, with just 7 of them standing the place is a sight for sore eyes.

After the 12 Apostles it was time for us to leave the incredibly great ocean road and head off to the Grampians. We spotted some emus, wallabies and kangaroos on the way. Because every tourist in Australia loves kangaroos and would like to see them from up close, Simon took us to a spot where we could feed them and try to take some (in)famous kangaroo selfies. The roos were very friendly and oh sooooo cute! I mean, just look at them!? 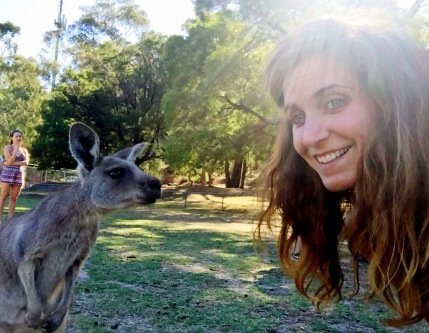 Kangaroo Selfie Time
Our last stop of the day was an amazing viewpoint, and if we have to believe Simon this is one of the top three viewpoints in Australia. And yes, the view was absolutely marvelous. Just see for yourself

Our accommodation for the night were some lodges in the Australian Outback. There also was a bar and a kitchen, where Simon prepared another delicious meal for us. My fellow carnivore travellers had the chance to taste some kangaroo meat. Before you go:”ahhhh, no!!” eating kangaroos isn’t such a bad thing. They are not bred in big bad farms where they are treated horribly, like we do with chickens, cows, etc back in Europe. Most of the kangaroos that end up on people’s plates are shot by farmers because they threaten the land or their animals, so you might as well not waste the meat and enjoy it.

That night we stayed up to look at the stars. And it was probably one of the prettiest starry skies I have ever seen in my life! With a beer in my hand and warmly tugged away in a sleeping bag I gazed at the skies while realizing how incredibly lucky I am to experience all this. Life is good.

Gone chasin’ waterfalls
It was the last day of our trip, and before we started driving the long way back to Melbourne we went for a hike. We hiked across a beautiful creek which would eventually take us to wicked waterfalls.

After this hike and a short stop at a giant koala building it was time for us to say goodbye. This trip was amazing and if you don’t have a car or a drivers license and the chance to do such a trips your own, then I highly recommend you go on this tour. It is something I’ll be talking about for years

I’m currently at the airport waiting for my flight to Tasmania, where I will see one of my besties from back home. We haven’t seen each other for 6 months so I’m very excited! Looking forward to all the adventures that are ahead!

Why we love the Great Ocean Road

When travelling along the Great Ocean Road it’s easy to think of it as being in three parts – The Surf Coast, The Otway Rainforest and the Shipwreck Coast. Depending which direction you are travelling on your tour you can visi...
Read More

The best way to see the Mornington Peninsula - aboard the Arthur's Seat Eagle (Apart from boarding a Bunyip Tour of course,) we think we’ve found the best way to view the beaches and natural landscape of Melb...
Read More