Bunyip Tours caught up with Daniel from the Koala Conservation Centre to learn more about this amazing place and why it’s such a great spot to visit on your way to the Penguin Parade on Phillip Island!

Q: Ok Daniel, can you tell us about yourself and the Koala Conservation Centre?

I’m an environment ranger and I’ve been working with Phillip Island Nature Parks full time for 13 years now. The Koala Conservation Centre consists of about 25 Koalas at the moment and most of them are just around our woodland area but there are 12 of those that are in close viewing areas. They’re still able to go through all the trees and it replicates a natural setting rather than being fully contained in a pen area.

Q: What do you most enjoy about working there?

The diversity of the job, we have lots of different tasks within the role. For example, I do a lot of work around pest plants and animal removal so a lot of weed work and trying to get the landscape looking similar to what it would have before settlement on the island. We’re focussing a lot on feral cats at the moment which aren’t so much of a threat to the koalas but are to a lot of the other animals that share the area such as birds and reptiles and so forth. Rabbit removal as well as they have an impact on the vegetation and planting.

We do a lot of revegetation work and we’re currently coming to the end of the season. We’ve planted a couple of thousand Eucalyptus trees around the Koala Conservation Centre this year and we aim to try and do that every year with a fairly high success rate – around 90 percent of the trees survive through the season. We try to fill in a lot of the areas that have been cleared in the past and account for some of the older trees that are around the place.

Animal Husbandry is also a big part of the role, looking after the koalas that are here and looking after the sick and injured koalas if we have them. We’re coming up towards our annual health check for the koalas we catch them all in October and do a general health check. We’ll weigh them, look at their eyes, teeth, take blood samples and check for diseases and ensure that they’re a healthy population. So definitely the diversity of the role is a really pleasing part of the job. 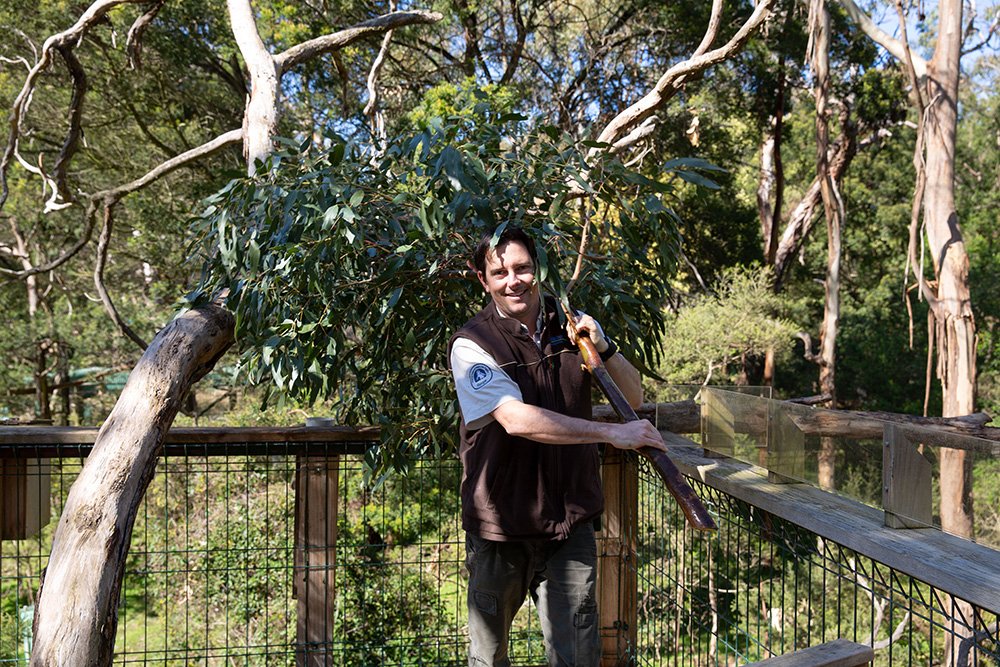 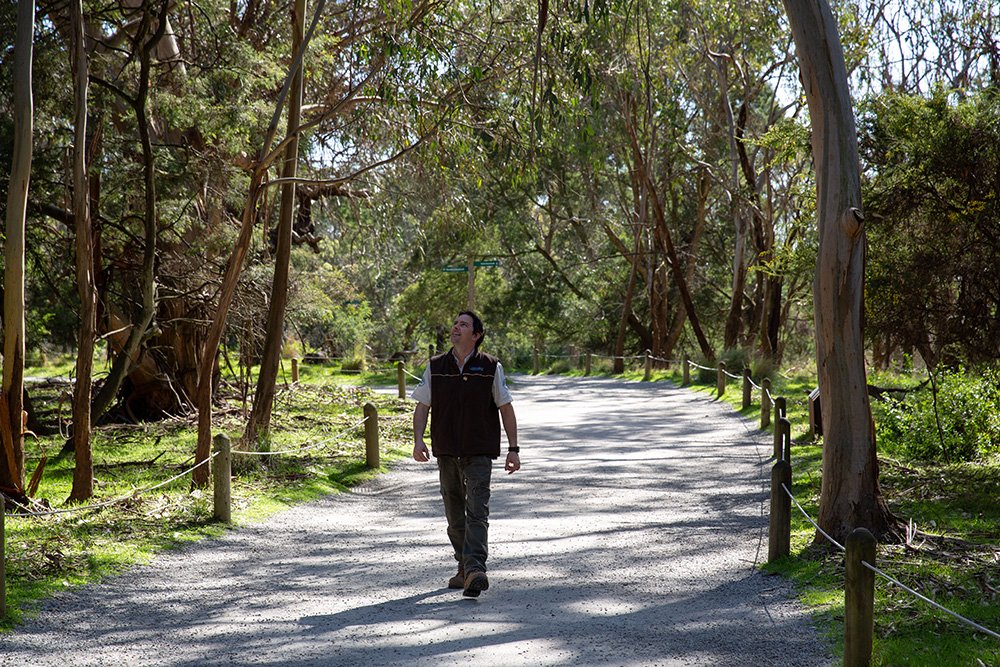 Q: What Koalafications(haha) and experience did you have before working here?

I hadn’t specifically done anything with Koalas before I worked here but I did a science degree at university and then volunteered around year 2000 when we had a big oil spill on Phillip Island. I got into volunteering around the place before getting a part time job and then moved into the full time work. So I do have qualifications outside of the role but a lot of my qualifications and experience I have gained while working on site and are specific for the role.

Q: Do you have a favourite koala fact? 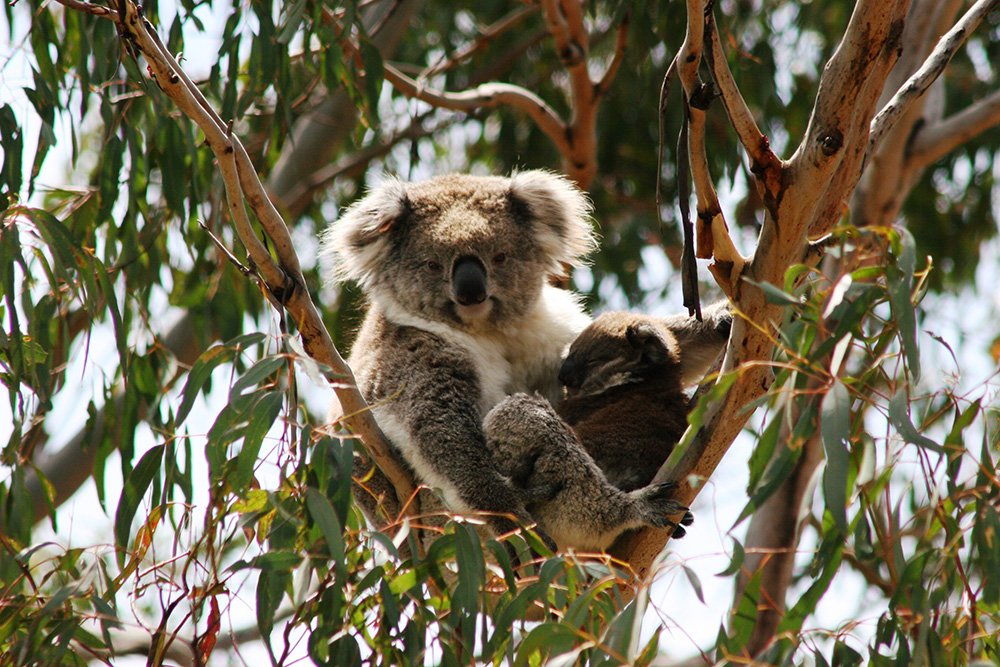 The most interesting thing about koalas for me is why they sleep so much. Koalas sleep around 20 hours a day and a lot of people think that they’re high or stoned on the Eucalyptus and it’s a charming story but not actually true. The reason they do sleep so much is the fact that they’re on such a low energy diet, if you break down the contents of the eucalyptus leaf you’ll find it’s 50 percent water, a lot of fibre, tannins, starch and there’s not a lot of proteins or sugar so they don’t get a lot of energy out of it.

They’ll eat about one tenth of their body weight a day, which is quite a lot of leaves but still they have to rest because it’s probably the equivalent of us having a bowl of cereal in the morning and that’s all we have for the whole day so they have to really conserve their energy for when they need it.

Q: Can you describe a typical day on the job?

A lot of it involves the roles I talked about earlier but if you are in a Koala centric role on the day then most of the work involves getting out there in the morning, checking on the koalas, making sure they’re all there as the ones on the boardwalks can escape. We identify them and check how much they’ve eaten of the extra food that we’ve put in, taking out the old food, cutting down new food.

We also mix with the visitors throughout the day, answer questions, provide a bit of supervision for the koalas if they’re low and close to the people.

If you’re here in another role it can also involve a bit of the same stuff as well as going off site to check cat traps and plant trees and stuff like that. It definitely varies day to day which keeps things interesting.

Q: Who usually visits the Koala Conservation Centre is there a typical customer?

Not really it’s pretty generalised, you do get a lot of young families that come and go for a leisurely walk through the day and we get tour groups that visit with international visitors every day as well generally in the afternoons. In the Summer it really is a combination of domestic and international visitors so it receives a broad spectrum of people.

Q: What attractions and amenities are available? 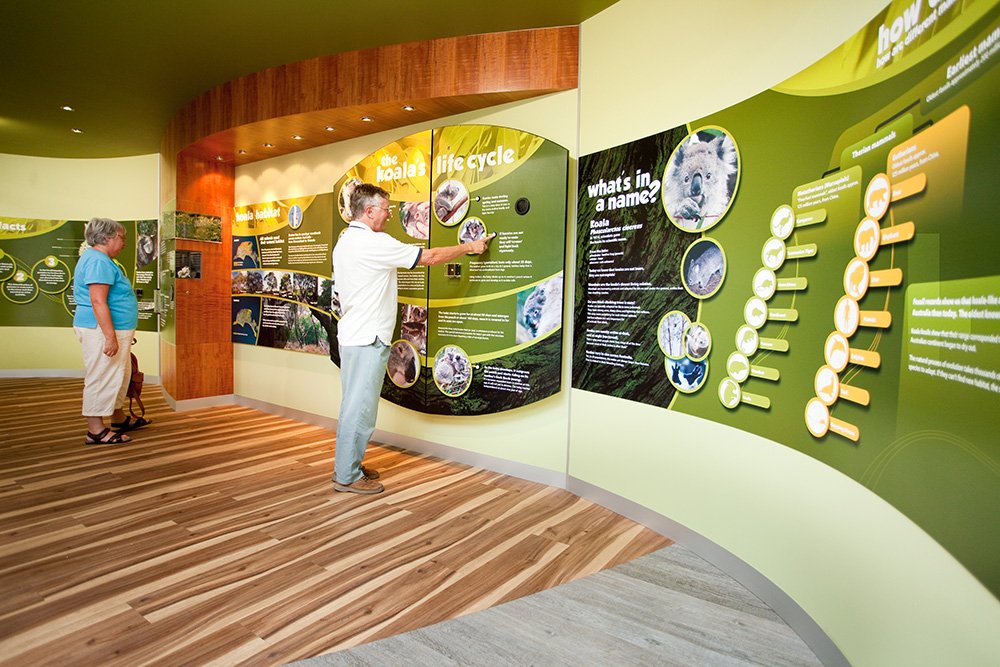 Once you walk out the back there are two boardwalks with close viewing areas. One of them is our main breeding area and the other is where we tend to keep the older koalas, we nicknamed it the retirement village and I guess we do keep the koalas there that are more in their “twilight years” so that we can keep an eye on them as they’re more prone to illnesses and so forth.

There’s another woodland area where the “free range” koalas live and it’s a nice area to walk through. We have a visitors centre with all the koala facts that you want to learn and it also has a café where you can get lunch and there’s ample parking out front. We’re on the way to Cowes which is the main town on Phillip Island so we get quite a lot of through traffic of people that are stopping along the way.

Q: What’s unique and fun about the Koala Conservation Centre? 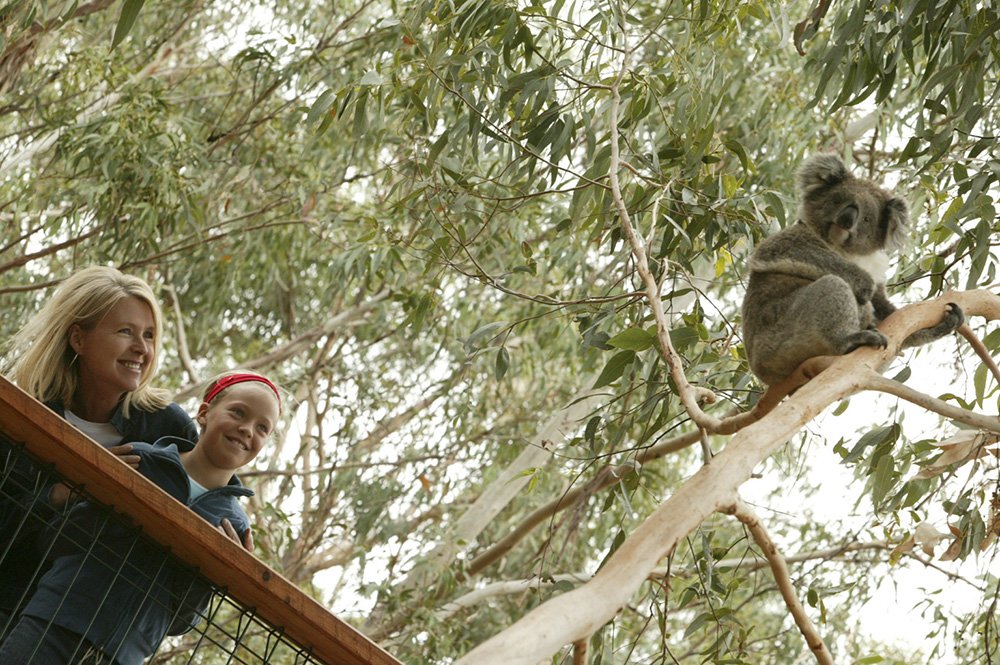 Probably the fact that the koalas are still in their natural setting even though they are essentially a captive population they are free to do as they please. We often point this out to visitors who might want to hold a koala or see a koala right down next to them. Some days the koalas want to be up high and catch some sun and sometimes they want to come down low and be social. So I think the fact that the koalas are able to do as they please sets us apart from other attractions rather than being in a small enclosed area.

Q: What advice do you have for visitors?

Q: Nice and is there anything that we’ve missed or something you’d like to say to potential visitors?

If they’ve got the time it’s definitely worth having a walk in the surrounding reserve. We’ve got the Oswin Roberts reserve just behind the Koala Conservation Centre and there’s some really great walks in there and a chance to see the Phillip Island free ranging koalas that aren’t part of our population. You can ride bikes through there and it’s really nice so if people have the time it’s definitely worth checking out.

Q: Thanks very much for your time Daniel

Bunyip Tours caught up with Lisa from BIG4 Beacon Resort on the Bellarine Peninsula to learn what makes this accommodation such a great place to stay! We stay here on our
Read More

Would you like to have a relaxing day not very far from Melbourne? Just an hour away from the hustle and bustle of the Melbourne CBD, the calling for a relaxing bath and sauna experience is always not to far aw...
Read More