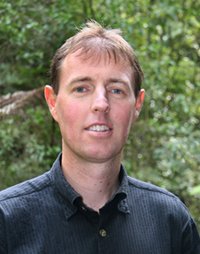 I grew up in Melbourne’s eastern suburbs and I had a very sporty upbringing, due to my mother, who was a successful swimmer and squash player in the 1950s/60s.

I swam like a brick, but I tried my hand at junior cricket and Australian Rules Football (with very little success) and then I turned my attention to racquet sports in my teens and became quite successful at squash and tennis, eventually playing state grade squash for several years in my twenties and state league tennis throughout my thirties.

These days I still play doubles tennis competitively, but my mind often gets my youthful ambitions confused with the limitations of my middle-aged body!

Since my youth I’ve loved cycling and hiking in nature and two decades of family holidays based at Somers on Westernport Bay allowed me to get to know this part of Victoria quite well whether on two wheels or two feet, particularly the Mornington Peninsula and Phillip Island.

My love of nature encouraged me to pursue a degree in naturopathy, which led me off on a tangent to study a diploma of remedial massage, which became my casual home-based business a decade ago.

However, I needed to supplement my income further and this led me to do transport work for most of the last decade and it was here that my love of long days on the road began, providing me with my segue into tour guiding.

Through my transport work I met many different and interesting people from home, business and public service environments each day on my travels.

I realised that by becoming a tour guide I could combine my love of driving, being in nature and meeting interesting people from different backgrounds from all over the world.

My own overseas travels have taken me to exotic locations such as Indonesia, Vietnam and Mexico and if I could live in any of those places it would be on the South China Sea in Lan Ha Bay, south of Halong Bay in northern Vietnam.

I would make my living guiding tourists around the maze of limestone karsts between the mainland and Cat Ba Island and we would catch our fresh lunch on the sea.

Through working at Bunyip Tours I have gained a subtler appreciation for the wide variety of scenic and wildlife attractions that are located in Victoria, within driving distance of Melbourne in one day, including Wilson’s Promontory, Phillip Island and The Great Ocean Road, which are all unique.

Bunyip Tours is small and quirky compared to some other tour companies in Melbourne, with an easy going team who all approach guiding and tourism in their own way, whether it be comic relief, education or story telling, but whatever their approach they all go the extra step to make sure that everyone on their tour has an enjoyable and interactive experience.

OUR TOURS HAVE BEEN SUSPENDED - FOR NOW Get in touch via email to get notified as soon as we are back on the road! Contact Us